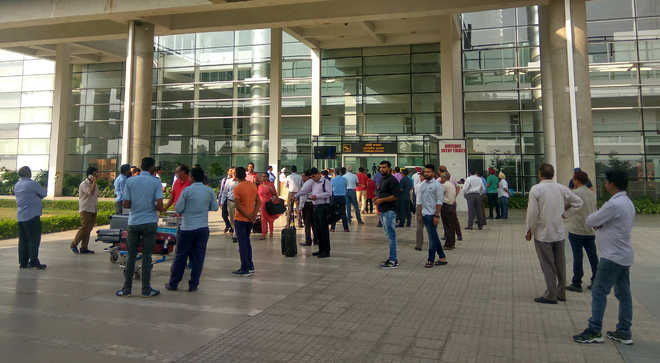 Chandigarh is among eight airports in the country that have been identified by the Airports Authority of India (AAI) for promoting maintenance, repair and overhaul activities for aircraft and aviation equipment.

“The Airports Authority of India has come up with a business-friendly proposal for MRO with zero airport royalty charges and significantly rationalised land rentals for eight AAI airports,” an action taken report on the ‘Status of Aviation Connectivity in the Country’ tabled in Parliament on Wednesday by the Standing Committee on Transport, Tourism and Culture stated.

The eight airports are Begumpet (Hyderabad), Bhopal, Chandigarh, Chennai, Delhi, Juhu (Mumbai), Kolkata and Tirupati. Other airports with available land and space resources, with potential to attract MRO service providers for establishing their facilities shall be identified and notified by AAI from time to time, the report adds.

Chandigarh international airport is co-located with the sprawling Chandigarh Air Force Station, while the civil airport has a separate approach and terminal building, the runway, air traffic services and navigation facilities are owned and operated by the Air Force. The IAF also has the country’s largest helicopter repair and overhaul establishment at this station.

Civilian flights from Chandigarh started from a small enclave located on the north-eastern edge of the air force station. In 2008, the Punjab government acquired 304 acres of land along the station’s southern edge, and a modern airport building was inaugurated in 2015. In 2019, the air force also lengthened and strengthen the runway to cater to international civilian flights operating heavy wide-bodied aircraft.

The Committee had earlier observed that at the time of aircraft purchase, aircraft manufacturing companies insist upon the aircraft operators to enter into a contract for maintenance of the aircraft in the manufacturers’ country, even though such facilities may be available in the country of the operator.

In September, 2021, the ministry had issued revised guidelines for rationalizing charges, including license fees, land lease, etc, levied on MRO service providers for the ease of doing business as well as to provide further incentives to the sector.

The Committee’s report also stated that India has the potential to be an MRO hub due to locational advantage, growing aircraft fleet, low labour costs and the natural talent to drive innovation. “However, the country has not yet been able to fully exploit the opportunities available in this sector and a major deterrent for growth of the MRO industry is high taxation of MRO components. Aircraft MRO services are critical in the aviation value chain and it would be of a huge loss for the country, if we do not tap the vast technical and skill base available in the country,” the report stated.

Cosmetics
We use cookies on our website to give you the most relevant experience by remembering your preferences and repeat visits. By clicking “Accept All”, you consent to the use of ALL the cookies. However, you may visit "Cookie Settings" to provide a controlled consent.
Cookie SettingsAccept All
Manage consent