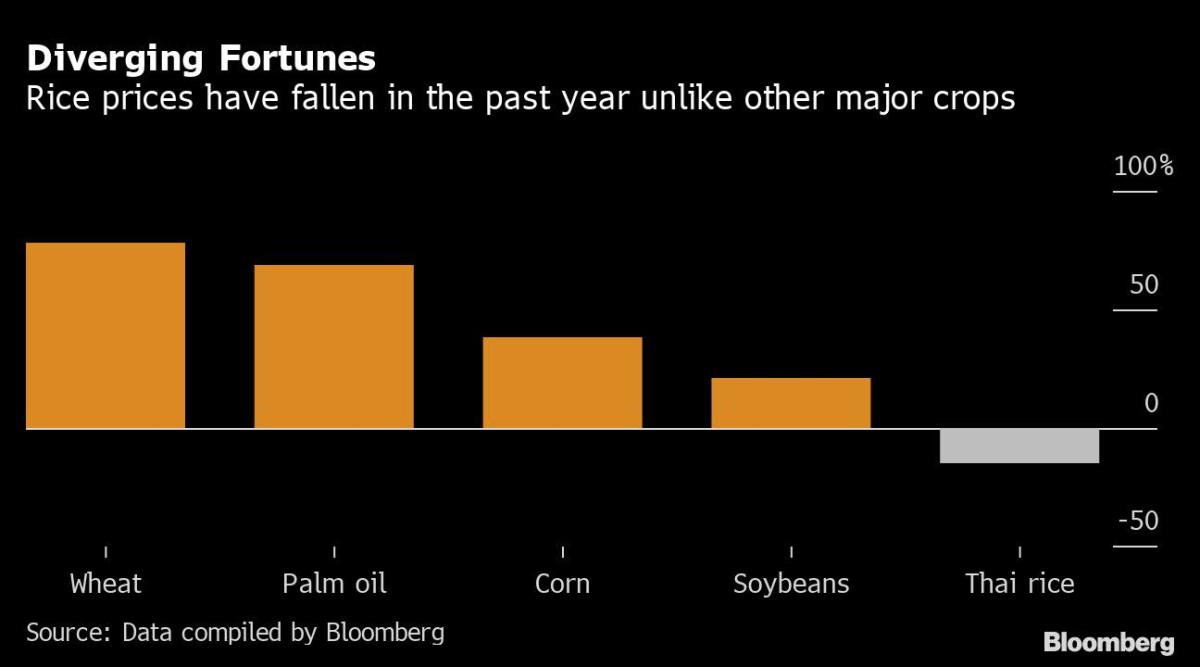 (Bloomberg) — Soaring fertilizer costs have rice farmers across Asia scaling back their use, a move that threatens harvests of a staple that feeds half of humanity and could lead to a full-blown food crisis if prices aren’t curbed.

Most Read from Bloomberg

From India to Vietnam and the Philippines, prices of crop nutrients crucial to boosting food production have doubled or tripled in the past year alone. Lower fertilizer use may mean a smaller crop. The International Rice Research Institute predicts that yields could drop 10% in the next season, translating to a loss of 36 million tons of rice, or the equivalent of feeding 500 million people.

That’s a “very conservative estimate,” said Humnath Bhandari, a senior agricultural economist at the institute, adding that the impact could be far more severe should the war in Ukraine continue.

Fertilizer prices have been rising globally due to supply snags, production woes, and more recently the war, which has disrupted trade with Russia, a big supplier of every major type of crop nutrient. The surge in fertilizer costs is threatening to stoke food inflation assuming farmers continue to cut back and crop yields suffer. If that happens, global supply chains are likely to take a major hit: Practically every plate of food makes it to the dinner table with the help of fertilizers.

Rice farmers are particularly vulnerable. Unlike wheat and corn, which have seen prices skyrocket as the war jeopardizes one of the world’s major breadbaskets, rice prices have been subdued due to ample production and existing stockpiles. That means rice growers are having to deal with inflated costs while also not getting more money for their grains.

Nguyen Binh Phong, the owner of a fertilizer and pesticide store in Vietnam’s Kien Giang province, said the cost of a 50-kilogram sack of urea — a form of nitrogen fertilizer — has jumped three-fold over the past year. He said some farmers have slashed fertilizer use by 10% to 20% because of soaring prices, leading to a lower output.

“When the farmers cut fertilizer use, they accept that they will get lower profit,” he said.

Governments in Asia, where much of the world’s rice is harvested, are keen to avoid this scenario. Keeping prices under control is important for politicians, given rice’s importance as a staple for hundreds of millions of people, especially lower income groups. Many nations provide fertilizer subsidies to increase yields of improved varieties of cereal crops.

The fertilizer rally is increasing their fiscal burden. India, which relies heavily on fertilizer imports, is set to spend about $20 billion to shield farmers from higher prices, up from about $14 billion budgeted in February. The South Asian nation is the world’s second-biggest producer of rice and exports to countries like Saudi Arabia, Iran, Nepal and Bangladesh.

Somashekhar Rao, 57, a farmer who grows rice on a 25-acre plot in Telangana, in southern India, said he’s struggling with the increased cost of fertilizer. He expects yields to fall by 5-10% for his winter-sown crop because of the delay in securing enough supplies. Fertilizer is most effective when used on plants at their peak growing cycle.

The crunch is not all bad. Overuse of chemical fertilizers is rife in the region. The surge in prices is incentivizing farmers to use resources more efficiently, according to the International Rice Research Institute, which is working with growers to achieve optimal results. Solutions include utilizing a combination of chemical and organic inputs to maintain yields while improving soil health.

Still, these steps will take time to implement. And as the war in Ukraine continues to disrupt economies across the world, farmers and the rice institute say the hardest days are perhaps yet to come.

“If this continues, then it’s inevitable” that prices will go up, Bhandari said. “It has to be reflected somewhere.”

Most Read from Bloomberg Businessweek

Loan and Mortgage
We use cookies on our website to give you the most relevant experience by remembering your preferences and repeat visits. By clicking “Accept All”, you consent to the use of ALL the cookies. However, you may visit "Cookie Settings" to provide a controlled consent.
Cookie SettingsAccept All
Manage consent